When you live an entire ocean away from your family and friends, you kind of have to get creative with how you will spend your birthday if you want it to be special. At least living in Europe makes that easy for me with tons of travel opportunities to keep my wanderlust at bay. As someone who prefers natural landscapes to bustling cities, I knew Interlaken, Switzerland, was the ideal place for my 22nd birthday festivities.

The town is a 4.5-hour drive from our home in Wiesbaden, and we were lucky to find out our car we shipped from home in January arrived in Germany just a few days before the start of our trip. Mom and I set off southbound early Saturday morning, and by lunchtime we made our first stop in Bern.

Entering a new city for the first time is always exhilarating, but the sights were particularly impressive as we crossed a bridge into the Swiss capital: the Bundeshaus, or parliament building, on the left and the Bernese cathedral on the right.

We walked around a crafts market at the base of the cathedral before heading into the city center, which was lined with shops and restaurants. The downtown was adorable and exemplified typical old European architecture, but the overwhelming crowds of locals made the sidewalks busy and difficult to navigate, and cable cars ran right in the streets so we constantly had to be vigilant or we would have gotten run over. We grabbed pretzel sandwiches for lunch from a takeaway market and got back on the road for another hour’s drive to Interlaken.

Situated between two, clear turquoise lakes with the Swiss Alps towering around in all directions, Interlaken is one of the more popular tourist destinations for mountain activities and extreme sports. I was surprised to find a good amount of locals roaming the streets and it never felt like I was in a commercial hub. The weather was warm with highs in the 50s during the day while the chalet-style buildings and scenery made me question if it was actually Christmastime.

I don’t ski or snowboard so I picked paragliding to cross off my bucket list. I originally was going to fly on Monday, my actual birthday, but a snowstorm was in the forecast so I moved my reservation up to Sunday. A van took me, four other paragliders, and the pilots to the alpine village of Beatenberg for our takeoff. I reveled in the mountain views while my pilot, Rob, prepared our sail. To start flying, we had to run down a steep hill, allowing the sail attached to our backs by cables to catch air until our feet could no longer touch the ground.

There really is no feeling like flying through the Alps with nothing separating you and the crisp air. People always say “Don’t look down” when you’re up high, but I looked down, and I saw Interlaken and the two lakes and straight ahead was the region’s famous Jungfrau peak. It was honestly one of the most relaxing ways to enjoy the scenery because for those 10 minutes or so, I was removed from civilization and technology and could just savor the moment. 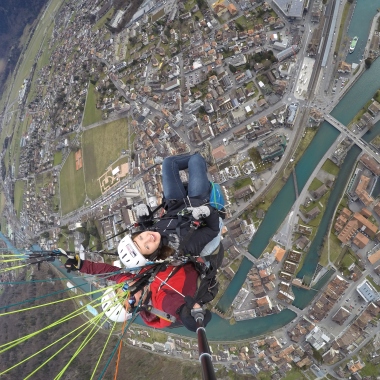 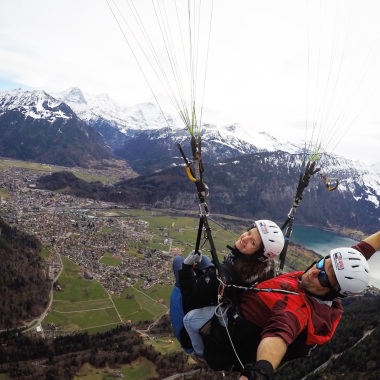 My other favorite sightseeing activity was taking a cable car to the top of the Niederhorn, another iconic peak in the region. We took the first ride of the day at 8:40, meaning there were only a few other people there when we got to the top. There was a restaurant serving Sunday brunch, but as you can imagine it was extremely overpriced, so we just strolled the surrounding snow-covered paths. Most people hike down to the base by the lake, but we weren’t equipped with proper footwear and some areas were icy. Being on top of the world was quiet and peaceful and gave us stunning panoramic views of the surrounding mountains and lakes below.

Lake Thun, situated at the base of the Niederhorn 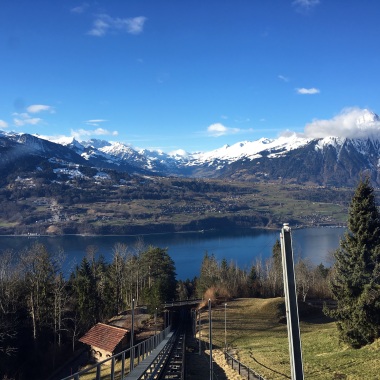 Halfway up the Niederhorn on the cable car

Other highlights in Interlaken included fondue—because nothing says Switzerland like dipping crusty bread into a pot of bubbling cheese—and a trip to the Sunday market. Vendors sold produce and hand-crafted goods, but we went straight for the food. We ordered from a stand that had a wheel of cheese cut open and sitting under an open flame, making it melty and gooey. They then scraped the melted top off the cheese wheel and plopped it on bread for a warm, satisfying snack. If you didn’t already know I love cheese, now you know.

We cut our trip a day short to get home before the snowstorm hit Interlaken, so I spent most of my actual birthday in the car. We did however take a stop in Lucerne in the morning. It was so picturesque with charming old buildings and the Alps as a backdrop. I snacked on a Starbucks almond brioche bun as we walked around the downtown before getting back on the road. Forty minutes later, we made it to Zürich, but the weather was cold and raining so we shared one more pot of cheese fondue and then headed back to Germany.

It’s not every year that I get to travel somewhere beautiful for my birthday, and while it would have been nice to share the celebration with more loved ones, Mom and I enjoyed the whole weekend and finally taking a trip out of Germany. We definitely plan to return to the Alps, perhaps in a different country and perhaps in the summer when we can hike without fear of slipping on ice and tumbling down the mountain!

One thought on “Feeling 22 in Switzerland”