It’s taken me a while to find the inspiration to post about the third stop of our family vacation because we didn’t have the best experience, but I’ll start with the highlight of our two days in the Netherlands.

One of my favorite things we did on the whole trip was seeing the Keukenhof Gardens in Lisse. The park was full of tourists, but understandably so because the arrangements of tulips and other flowers were absolutely stunning. The sky was gray and cloudy (no shock there) but the extensive grounds of the gardens were blanketed in every color imaginable. Every time we turned a corner we were wowed by another display, each one different from the other. There was even a windmill and giant clogs for us to take pictures in, helping us take part in the Holland stereotype. Speaking of stereotypes, I tried the famous Dutch stroopwafel. It was warm and gooey and tasted like a graham cracker, but I preferred the waffles in Belgium.

As for Amsterdam, I wish I could say I fell in love with the city like many people I know who went there, but not one of the three of us cared for the atmosphere. It didn’t help that the weather was cloudy and only 50 degrees with a wind chill more like 40 degrees, or that Mom’s phone was stolen when she set it next to her on a bench while eating a raw herring sandwich. The buildings were cute but their dark colors made the day seem even more dreary, and Dam Square just didn’t compare to a lot of the other town squares we’ve seen in Europe. And while I am indifferent to the legality of marijuana or prostitution in the city, the overwhelming presence of these two things, especially in the Red Light District, gave off a trashy vibe in my opinion. (Sorry, I hate to sound so negative but I want these posts to be honest)

There were some positives though! After waiting almost two hours in line we were able to tour the Anne Frank House. We walked from room to room with an audio tour that covered everything from the Frank family fleeing Germany to their arrest after hiding in their annex in Amsterdam for more than two years to Anne’s father Otto, the only survivor out of his family and the others in the annex, deciding to publish his daughter’s diary. It was a moving experience, particularly when we walked through the tiny passage into the hidden part of the house past the bookshelf that had blocked off the secret doorway. We saw the bedroom where Anne and her sister slept with their decorations, photos and magazine clippings still pinned to the walls. Like most people probably, I had read Anne’s diary in school so seeing the actual house put her whole story into perspective.

One of the cuter streets on the canals 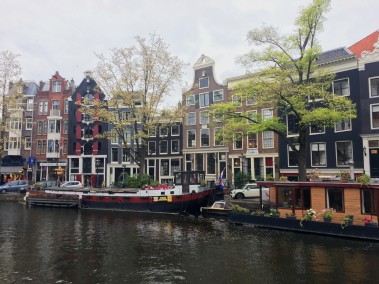 Views from our canal tour

We also went for a canal tour where we got to see both the old and modern parts of the city. I didn’t go in the Van Gogh museum because entry costs €17, a steep price for someone not so interested in art, but Mom and Alli loved it.

So while I never plan to return to Amsterdam, I’m still grateful I got to go because it was high on my priority list coming to Europe. I’ll treat our visit as a lesson to A.) be extremely careful of my valuables while I’m traveling and B.) accept the fact that I won’t like every single place I see.