I know it’s been a while since I’ve posted about my life in Europe (yes I’m still here!) and that’s because I had a relatively quiet summer after my backpacking adventure. However, with my mom’s birthday and Labor Day Weekend closing out the season, we planned ourselves a beach trip to Lagos, Portugal, to celebrate the last of the warm weather.

Before moving to Europe, Lisbon was high on my list of cities to visit, but I didn’t know much about the rest of Portugal. As I started researching the various destinations the budget airlines fly to from Frankfurt, I realized the Algarve region on the country’s south coast, known for its abundant sunshine, rocky cliffs and stunning beaches, was the ideal end-of-summer destination. Though the only airport is farther east in Faro, we chose to take a train to Lagos because it was one of the biggest towns in the region, so we figured there would be plenty of activities to keep us occupied.

We could not have been more satisfied with our gamble to check out this intriguing spot. For the five days we were there, the weather was consistently sunny and 85 degrees. The people were the friendliest I’ve encountered in Europe so far and spoke outstanding English, they said due to all the tourists who come. Though Lagos is known for attracting beachgoers from all over the world, we never found ourselves overwhelmed in massive crowds.

Lagos gave us everything we needed for a relaxing beach vacation. We stayed in a (very) small studio apartment outside of downtown in a quieter neighborhood that was only a 5-minute walk to the closest beach, Praia do Canavial.

About a 20-minute walk led us to the iconic sea caves of Ponta da Piedade, where we started our clifftop hike on the first day. We arrived early enough in the morning that there weren’t many tourists around and the weather was still cool. The views of the rocks formations against the clear turquoise water were incredible from above, and later that day we took a boat tour to see the same caves from a different angle. We took a sailboat from the Lagos Marina where we could then get in a smaller boat to get close to the rocks. The boat tour was the highlight of the trip for me because after seeing the caves, we were allowed to jump into the water for a swim and relax with a traditional Portuguese cocktail as we sailed along the coast.

We spent the rest of our days in Lagos on the beach at Praia Dona Ana. When we arrived around 9 a.m. the surf was calm and just a few other people walked along admiring the dramatic cliffs on all sides, and by the afternoon, high tide came as did tons more people, but the bustle was actually kind of enjoyable as it reminded me of summer holidays at the beach back home in Maryland. 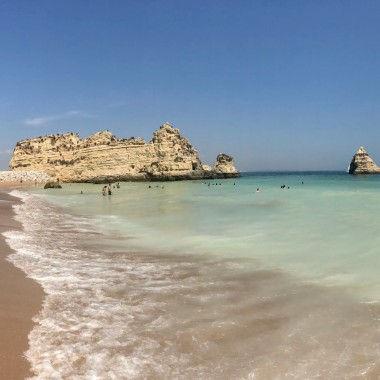 We did, however, visit another beach outside of Lagos that had quite a different atmosphere. We ended up renting a car so we could see more of the Algarve region, including Praia da Marinha, ranked as one of the top beaches in Portugal. For me it was definitely one of the most beautiful places I’ve ever seen because of the way the cliffs looked, but we must have arrived at high tide because the beach was small and practically every square foot of the sand was already covered in people. I went for a quick swim and would’ve loved to stay longer, but not under thoe crowded circumstances. 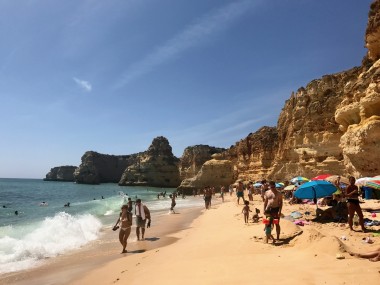 Praia da Marinha from above

Another sight I was dying to see was the Benagil Cave, which is all over Pinterest and often featured in viral travel videos that I’ve seen on Facebook. Unfortunately we only got to see it from above. It was pretty cool though walking along the trail and suddenly seeing a big hole in the ground that looked down into a massive cave with a beach. We signed up for a boat tour so we could enter the cave, but the tour ended up being cancelled due to windy conditions and we didn’t know until we showed up! At least the town, Carvoiero, where we went for it had so much Portuguese charm with white houses all along the cliffs—and prime souvenir shopping!

Our last adventure in the Algarve with our rent-a-car was seeing the sunset from the town of Sagres, the southwesternmost point of mainland Europe and nicknamed “the end of the world.” There was certainly an eerie, apocalyptic feel as we pulled up to the giant fortress at the edge of the cliffs. It could have been the intense winds, but it was also because the beaches nearby were practically empty and few people strolled along the walls of the fort. We paid €3 to enter the fort and it was a peaceful place to set up for a time-lapse video as the sun went down.

Grounds inside the fort

And finally, let’s not forget the food! I didn’t know much about Portuguese cuisine but turns out it’s mostly just really fresh delicious seafood. Highlights included our first dinner, where mom and I each had gazpacho and then I had clams with garlic sauce and she had cataplana, a traditional Portuguese seafood stew. For lunch one day I got a “Portuguese meat skewer” with some of the best cooked and seasoned steak, pork, and chicken I’ve ever had. And thanks to Trip Advisor, we found a hidden gem on a side street that served steaks with all different kinds of toppings, and we actually went there two different nights. 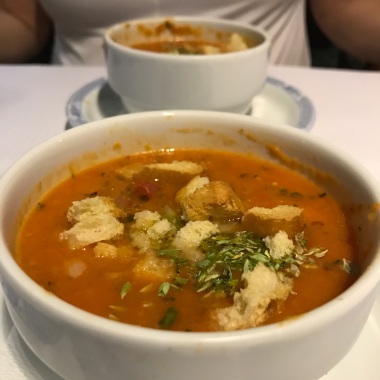 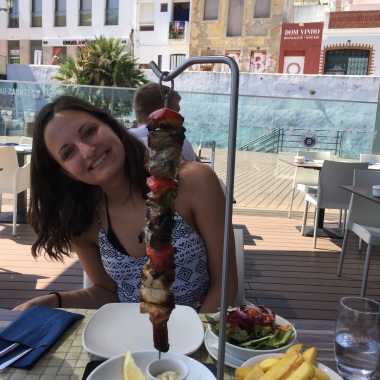 I’ve been happy with just about all my trips so far in Europe, but this trip to the Algarve was especially perfect. I miss the sunshine and beautiful views and genuinely nice people already, but it’s a good thing I get to go back to Portugal in the beginning of November to explore the capital, Lisbon!