Well I have yet again fallen in love with another spot on the Mediterranean, this time in France. My mom and I stayed in Nice but tried to make the most of our four days there to see as much of the French Riviera as possible. I’d say we were successful.

On our first day, we got one big introduction to the region with a tour that took us to Eze, Monaco, Saint Paul de Vence, Cannes and Antibes. While it was a very long day, it was a great way to get a taste of all the different towns.

We loved Eze, even with the little bit of rain we got there. A wander through the old, stone streets eventually led up to the “Exotic Garden,” the highest point in town. The views were 100 percent worth the climb and even though I’m not particularly interested in botany, I enjoyed the variety of plant species lining the paths.

The other highlight of the day was Monaco. We were only given an hour to explore and find lunch, but we enjoyed it so much we could’ve spent the entire day there. First of all, it was pretty amusing how tiny this country is—the second smallest in the world! Then, walking down the street, you could just feel how rich Monaco is, from the extreme cleanliness to the huge yachts in the harbor to the gaudiness of the Monte Carlo Casino. I felt like I was on Rodeo Drive in Beverly Hills. 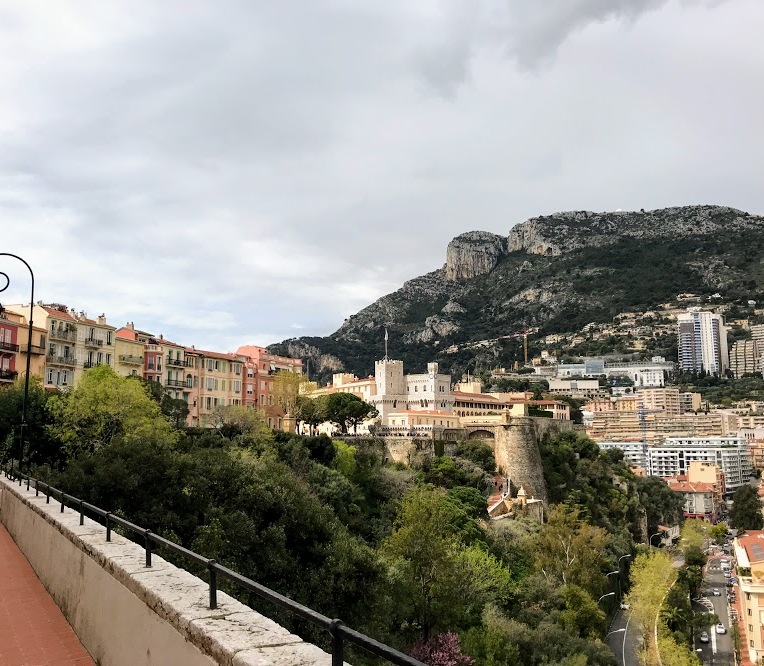 Most of Monaco is in this picture!

Saint Paul de Vence was another medieval town similar to Eze but farther from the sea, which could explain why we didn’t appreciate it as much. It was still worth getting lost in its narrow, historic streets for a little bit. 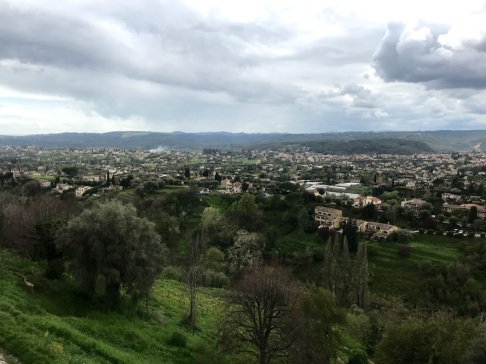 I was disappointed to see Cannes almost completely under construction as the city prepares for its iconic film festival in May. Our tour guide let us out for a quick walk along the promenade, but I think we would have gotten much more out of our stop here if we came at a different time of year (I don’t even have a picture to show for it).

By our last stop in Antibes we were pretty exhausted but the town had some nice views toward Nice (which are unfortunately hard to capture in a picture). Now I’m just trying to figure out if Eze and Monaco were actually that much more amazing or I just liked them so much because it was the beginning of the day.

After the long first day, we were so happy to have an open Saturday in Nice to see all the sights. I particularly liked walking through the Jardin d’Albert and exploring the narrow streets of the old town. With the Italian-style architecture—keep in mind Nice is less than an hour drive from the border—I felt like I was back in Venice without the canals. The houses were all so colorful and like Monaco, the city was cleaner than most. I saved the hike up the famous Castle Hill for a completely sunny day and it made the panoramic views that much more spectacular. Plus we were shocked to find out you could see the snowy peaks of the Alps peaking from behind the hills!

While I would not recommend Nice for a beach-specific vacation because the shore is made up of large stones that destroyed my feet, it was a central hub for reaching other towns with sandier beaches. After a 20-minute bus ride, we arrived in Villefranche-sur-Mer, which we had seen from above on our tour the first day. The beach was fairly small with postcard-perfect views of town and not too crowded, probably because it was a Monday and still mid-April. It was so much quieter than Nice, but still had the same charm and tons of restaurants on the water. As my mom and I spent the last hours of the afternoon drinking mojitos and eating fried zucchini blossoms and chickpea fries, I realized this town would be my top choice of where to stay if we were to ever return to the Riviera. 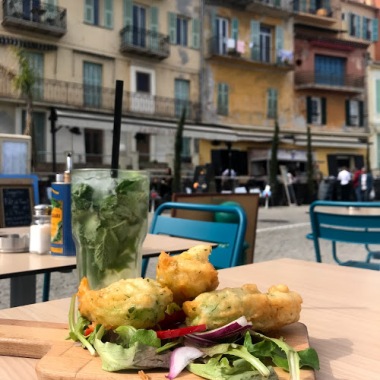 Nice was also home to my first race in Europe—Nice Running Day where I did the 10k—and it was actually my first time racing in a year and a half. I forgot how much I missed the atmosphere but was also reminded that travel and racing are not an ideal combination for me. Nevertheless, it was a wonderful experience to feel like a part of the French running community and to race along the Promenade des Anglais. Now I’m feeling inspired to find some races in Germany!

I’ve been learning recently through my travels that you can’t really get a feel for a whole country unless you’ve seen all the different parts of it. Paris is so different from the Alsace region (near the German border) which is so different from the Riviera. I’m glad I have the opportunity to experience it all because finally making it to the Riviera made me appreciate France that much more, and Nice is now one of my favorite cities I’ve seen.

It also got me super pumped for our 11-day trip to Italy with my sister which starts next week!

One thought on “Touring the French Riviera and Monaco”