Well the one family vacation I was most looking forward to when I moved to Europe has finally happened: Italy! This trip was actually in the works since we got the news of our move in summer 2016. In 11 days, we saw 14 cities and towns and I’m honestly shocked by how much we were able to fit in and how much more of Italy I still want to visit. It was a jam-packed itinerary but we made it through with the help of tons of pasta and wine, which I will probably have to write an entire second post about.

We arrived in Venice in the late afternoon of our first day, so we had time to check in to our Airbnb and wander the streets to Saint Mark’s Square before we had to get to our dinner reservation. After falling in love with this adorable canal city on a trip with friends last year, it was a treat to finally get to share it with my family.

We used our full day there to see as much as possible, and we ended up having plenty of time. We started early in the morning at Piazza San Marco so we could see it before the crowds got there. I waited in line for the Basilica San Marco to open while my mom and sister went up the Campanile, or bell tower. After strolling through the church, we sprung for the stereotypical gondola ride—an expensive must-do while in Venice. We took a ferry to the island of San Giorgio Maggiore where we could look back on the city from the top of the bell tower. We then took a ferry to my favorite sight in Venice: the island of Burano, best known for its colorful houses. This was the perfect stop for lunch and to take some pictures, although they can’t do the place justice. Then we headed back to Venice, ate gelato, and sat drinking wine on a canal until dinner.

While I could always spend more time in Venice, having the one full day was certainly enough.

We left ourselves three full days in Florence, plus almost the whole day when we arrived by train from Venice. After getting settled, we went straight to the Uffizi Gallery, home to the “The Birth of Venus.” The museum is actually free the first Sunday of the month so it worked out well that was the day we were there. This also meant major crowds, so we didn’t stay long. In the afternoon, we did a free walking tour to learn more about the history of the city and decide what to do the next day.

We started our first full day in Florence at the bell tower of the Duomo. It was probably the most grueling tower climb I’ve done in Europe, but the views of all the surrounding hills and warm-colored buildings are too great to pass up. Then we went in the cathedral. It’s worth looking inside, but the simplicity of the interior just did not match the stunning exterior, though we learned on our walking tour that this contrast was intentional. We spent our afternoon at Piazzale Michelangelo where the views might have been even better (and free!) than the bell tower. 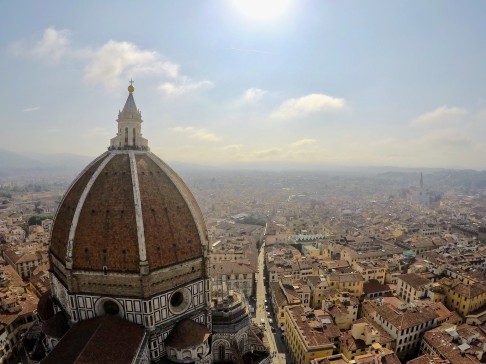 On our second full day in Florence, we took a tour out to Cinque Terre. The tour turned out to be a disaster from start to finish (I don’t want to bore anyone with my complaints about it), but the towns themselves were really nice albeit crowded and I would have loved more time to explore them. We started in Manarola and really only had enough time to walk out to a lookout. The sea at the base of the cliffs was enticing for a swim, but I’ll just have to dive in if we ever return. Then we went to Vernazza, Monterosso, and Portovenere. I wish I had more to say, but this tour was so terrible we didn’t have time to do much in any of the towns. Nevertheless, all the colorful cliffside towns were breathtaking.

We spent our third and final day in Florence on another tour. This one was much better and took us all throughout Tuscany. We started in the quiet hilltop town of Monteriggioni before heading into Siena. I really enjoyed Siena because it was smaller and less crowded than Florence, and the cathedral was beautiful on the inside AND outside. After lunch in Siena, we were dropped off at San Gimignano, which I found picturesque despite it raining the whole hour we were there. Our tour ended with a wine tasting at a local winery—the highlight of the day for me! It was my first proper wine tasting! 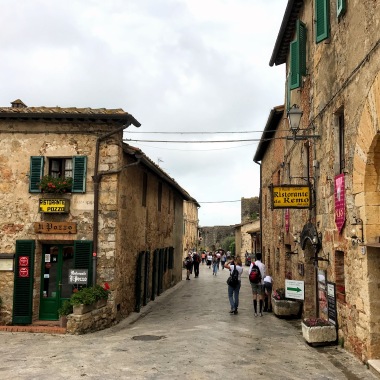 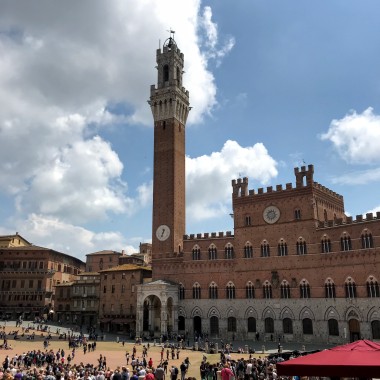 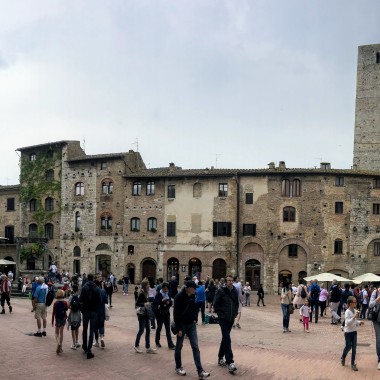 Outside of Siena Duomo

Inside of Siena Duomo

After Florence, we were off to Rome. We took another morning train so we could have plenty of time to explore in the afternoon. Unfortunately when we arrived, we had a mishap where our bed and breakfast reservation had been cancelled and we had to scramble to find another place to stay. It was stressful in the moment but worked out in the end and we still made our free walking tour in the afternoon. These tours are seriously a great way to get acquainted with new cities.

We pre-booked skip-the-line tickets for The Vatican for our first day. We went first thing in the morning to see the Sistine Chapel before it got too crowded and could have spent more time in the Vatican museums if it wasn’t a beautiful day outside. We waited in a long line in Saint Peter’s Square to get into Saint Peter’s Basilica. The climb up the dome of the church was a tad claustrophobic but we were able to see all of Rome. After a to-die-for carbonara lunch in the Trastevere neighborhood, we checked a few other sights off our list, like Gianicolo Hill, the Spanish Steps, and of course the Trevi Fountain.

View of Saint Peter’s Square from above 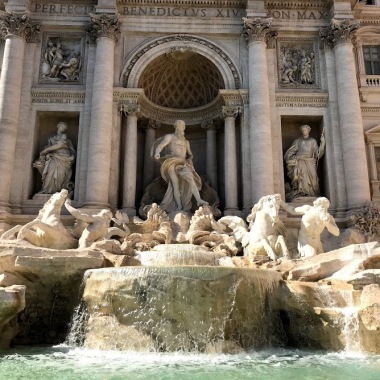 Day 2 was dedicated to ancient Rome. Our skip-the-line tickets also applied to the Colosseum and Roman Forum, but we still went early to avoid crowds. I loved being inside the iconic arena and walking along the ruins where the ancient Romans walked. It’s amazing how I’m not a history buff but this was one of my favorite attractions I’ve been to in all of Europe.

I was surprised by how much I loved Rome considering it’s a big city, but it didn’t have tall buildings so I think that made it feel smaller. It also helped that we had nearly perfect weather.

By this point in the trip we were exhausted. We arrived to Naples midday to see trash all over the streets, cars driving in every which direction, and people who made us feel uneasy. On top of all that, I had read to be extra aware of pickpockets in this city. But our bed and breakfast, Sweet Sleep Napoli, was so so nice and had a rooftop terrace where we spent our afternoon relaxing in the sun. After nearly 10 days straight of sightseeing, this was a welcome change of pace.

The only reason we were in Naples was so we could do an Amalfi Coast tour, so that’s how we spent our last full day in Italy. Let me say…we saved the best for last. Unlike with Cinque Terre, this tour was well-organized and we had enough time to soak in the beauty of Sorrento, Positano, Amalfi and Ravello. Well, I could’ve used an entire week here just to lay on the beach but that’s a different story. Positano was by far my favorite because I loved how the pretty little houses were built into the hillside that went straight down toward the sea. The views were the very definition of postcard-perfect.

I had been hyping up this Italy trip for almost two years, and I must say I’m pretty impressed with how much we were able to see in those 11 days. It would have been nice to have some relaxation time built in, but because we were on a time crunch with my sister’s vacation time, we decided we would regret cutting anything from our itinerary. I like our decision 🙂